Energy density tells us how much energy can be released from a certain weight of fuel.

Gasoline is the most convenient and one of the most potent (energy-dense) fuels on the planet.  Hydrino energy is far more energy dense.  It is the most powerful chemical reaction we have.

If you can drive an SUV driving for 1 hour on the highway with petroleum, you can drive for 47hours on the highway using hydrino (atomic hydrogen from water).  Another cool fact, 1 litre H2O = 2187MJ = 600kWh which would take a Tesla or the new Audi e-Torn about 1500 miles. The switch to hydrino energy should be rapid (10 years). Meaning by 2025 most new transport may be hydrino powered, and by 2029 all new transport should be hydrino powered. 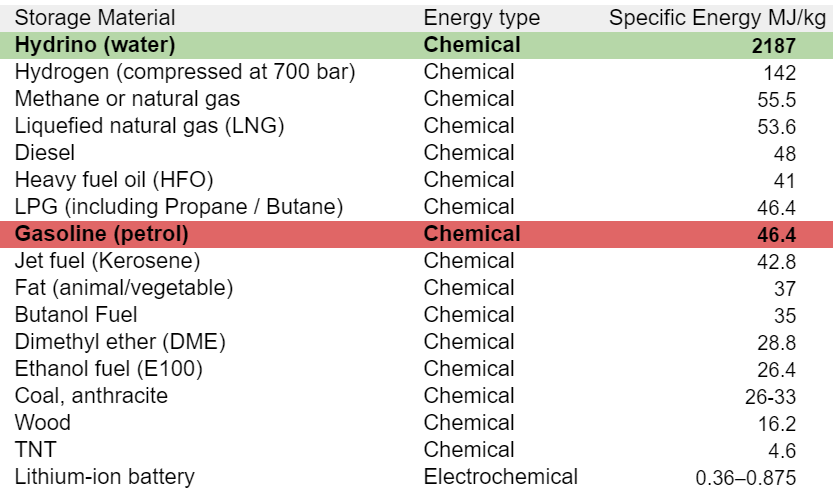 HYDRINO CHEMICAL REACTION IS NOT HYDROGEN COMBUSTION OR A FUEL CELL

Everyone’s talking about the “hydrogen economy.”  This refers to hydrogen combustion which is not related to hydrino energy. If we could make cheap hydrogen, we would – but we can’t without a massive solar/wind ecosystem (which will never scale fast enough we need to).

Hydrino chemistry is unrelated. Hydrino chemistry has been proven by Grace Chemical (NYSE: GRA), by university labs, by the US Department of Defense testing, and in over in 100 Journal Articles.

Hydrogen gas has been used forever.  The first hydrogen combustion engine was in 1807.  Hydrogen is light and ideal for filling balloons, but exposively bad for airships (see: the Hindenburg). Liquid hydrogen is the main energy for space ships like the Space Shuttle.  Hydrogen fuel cells have been around since 1839.  This is what companies like Bloom Energy are doing – their only innovation is increased surface area.  All of these hydrogen fuels come down to this simple reaction:

While we do use liquid hydrogen for rockets – it takes energy to make it.  Precisely 1.48ev to make it from water.  The only reason we are talking about hydrogen is because we could use clean renewables (e.g. solar) to make the hydrogen.  The main issue – we could never scale existing renewables to the earth fast enough to impact the energy equation.  For example, all the batteries made at Tesla’s Gigafactory in a year, can only power the US for 3 minutes.

This newly discovered (1990) catalytic reaction gets 204eV (81.6eV+122.4eV).  So conservatively 100x combustion of hydrogen per hydrogen atom (disregarding kinetics or rate-limiting steps).    The fuel is atomic hydrogen, the catalyst is water (but there are others).   At this point, many chemists would be like – hunh?   This is a resonant transfer reaction – resonant transfer reactions engage via electromagnetic coupling.  I’m sure you’ve heard of photosynthesis, then you will realize that resonant transfer reactions – radiationless energy transfer are common.  Most theoretical physicists would never have thought to consider this…  Mills theory is the best source for details – see Chapter 5 which provides a deep dive of the chemistry.  If you are impacted by this (energy, industry, transport) reach out for strategic consulting – you must know this new science here from a basic theoretical to experimental.

What is the output of the reaction?   H2[1/4] – A quarter radius electron hydrogen (small hydrogen) paired with itself.  Dihydrino gas.

Does it exist? Yes. This is massively reproduced by researchers around the world.  In 2003, Johannes Conrads – Director of a German Plasma Institute – proved hydrino energy and published.  In 2004, Dr. Phillips then at the University of New Mexico proved hydrino energy via calorimetry. After surprise by physicists, they said some “unknown error” or “field acceleration” must explain the energies of  the 2004 paper.  Dr. Phillips a Professor who is part of the US Navy’s Energy Group designed another study.  This International Journal of Hydrogen Energy paper in 2008 silenced all of the critics.  Nobody on the planet has produced chemical energy densities like this in the history of mankind.

Subsequent independent analytical verification of hydrino compounds at University labs (must see report) have shown upfield shifts in hydrogen never seen before and validated energy gains not known by any quantum chemistry.

The discovery of this chemical reaction was one of the most imaginative leaps of creative and introspective science of this century. Mills first degree was in chemistry afterall.   In the book America’s Newton, the author Thomas Stolper praises Mills:

“Mills’ discovery of a new domain of chemistry already ranks him with modern chemistry’s founder, Lovoisier.”

Side note:  this book is an amazingly detailed account of Mill’s journey and why even “cold fusionists” rejected him as “crazy.”

note: as H2O is the fuel (electrolyzed to atomic hydrogen) and a catalyst, obviously not all the H2O can be converted. The one litre of fuel water, would need about 2 litres of water as catalyst.