Brilliant Light Power has prepared an arsenal of proofs of hydrino for 20y+.   You can see their latest powerpoint on their analytical tests here.

Some select other papers:

In 2003, Johannes Conrads – Director of a German Plasma Institute – proved hydrino energy in tests on German soil and published.

In 2004, Dr. Phillips at the University of New Mexico proved hydrino energy via calorimetry. How did physicist react?  Total surprise.  In fact, they refused to believe and said some “unknown error” or “field acceleration” must explain the energies.  They did not want to believe the data. Dr. Phillips a Professor who is part of the US Navy’s Energy Group designed another study.  This paper in 2008 in the International Journal of Hydrogen Energy silenced all of the critics.  Nobody on the planet has produced chemical energy densities like this in the history of science.

In 2009, some lead physicists and chemists independently validate hyrino states of matter and energy.  Their findings are summarized below.  The full report is available.  University labs (must see report)  In summary, they have shown upfield shifts in hydrogen not seen before and validated energy gains in many reactions impossible by any quantum chemistry. 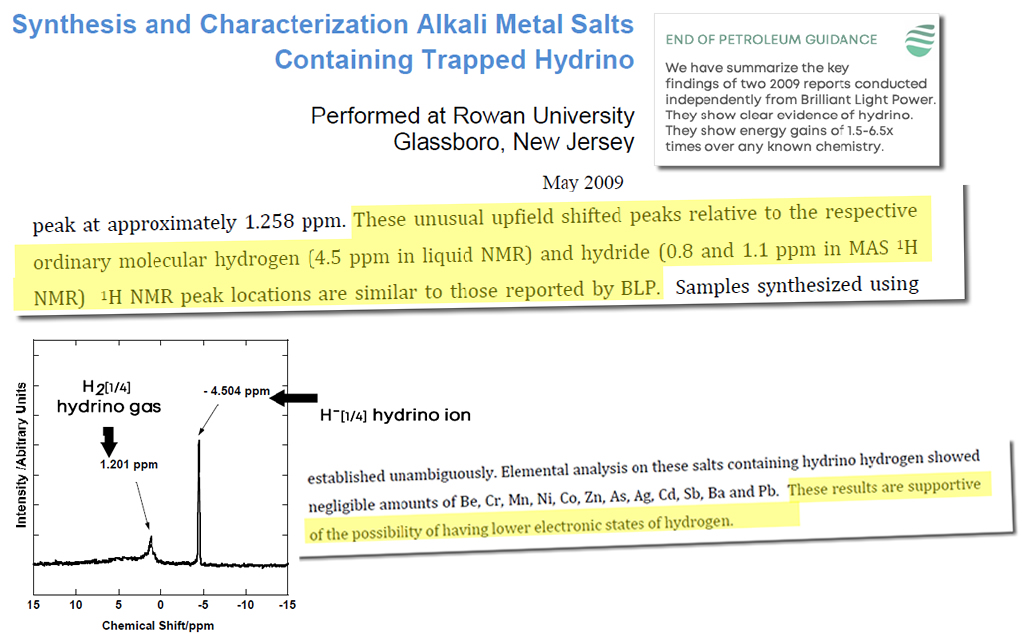 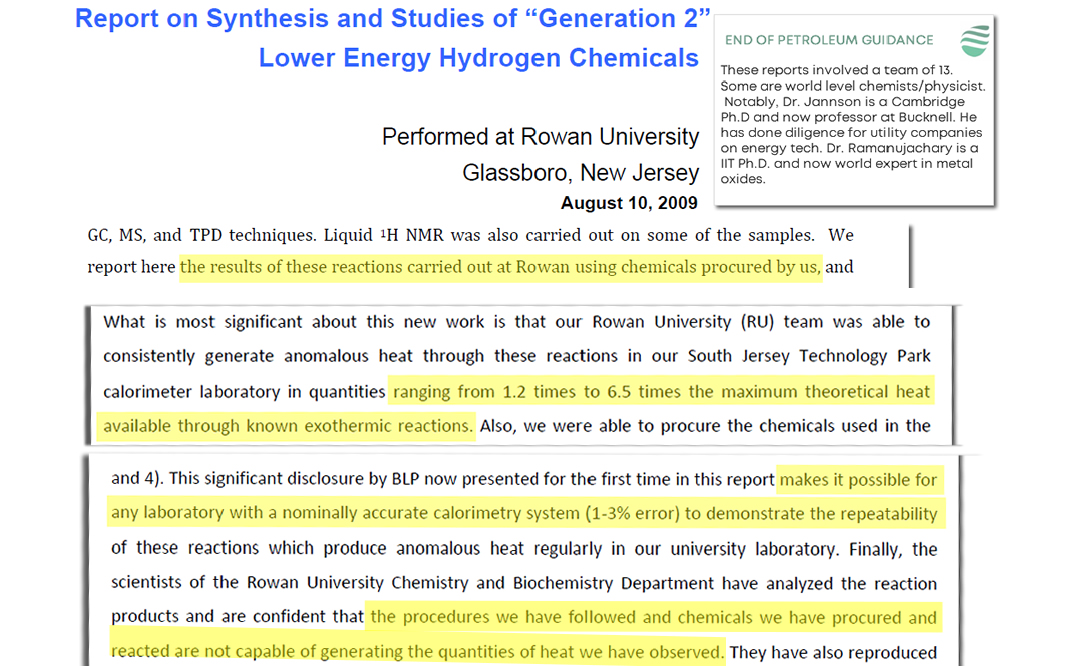 I’ve known Randy almost 10 years.   When I first learned about new chemistry and physics I was puzzled. How can quantum mechanics be so wrong?Because I teach my kids this, I was skeptical… We performed NMR spectroscopy at our labs and were pleasantly surprised to see a new form of hydrogen….

We looked at the power x-ray diffraction before and after, the heat effects, and the raman spectroscopy.  In all our measurements we find the metal and the oxide hasn’t changed form. It is just the water. That was convincing. I can vouch this is a real phenomenon.“

World expert on Metals and Oxides

“ARA is risk averse, and we are all ex-military… ARA has completed 2 independent validation studies at 2 major universities. We have confirmed this amazing thermal energy exists. US Department of Defense labs don’t care about the physics controversy, does it produce energy and is it clean are the questions they care about… ARA [has signed] a license agreement that gives us rights to use this tech for government purposes.”

“It is understandable why even the best of scientists have difficulty taking seriously that which has been accomplished by Dr. Mills and his team… because of how completely it transforms our understanding of atomic and molecular structure…This new source of energy [is] a reality for all of mankind. The rest however painful.. will follow.”

Defense Contractor with 1100 employees, running for 35 years, with $200mi in annual revenues.

On January 15, 2019 we talked to a WR Grace chemical engineer – he verified hydrinos in the Grace labs.  A petroleum catalyst engineer knows chemistry and energy – and has no vested interest (if anything the opposite). At the bottom of the page we give more details about their tests from a 2001 paper.  Listen to the audio.

“Mills sent us samples so we did three or four types of tests on the samples and we found the same types of anomlies – that are not textbook material signatures.

…I was convinced at that point.”

2001 Journal Article - Hydrino Compounds Validated by Grace, U. Mass, NRC and more
How do you  analyze hydrinos via NMR?

Scientists know a lot about hydrogen compounds.  Could they miss an entirely new domain of chemistry?  Yes. Hydrino compounds have different properties.

A hydrino will have a smaller electron radius.  This closer electron will shield the nucleus more and cause a shift in the NMR signal (to the right, aka “upfield”). BINGO.  See potassium hydride (KH) vs potassium hydrino hydride (KH*) in Fig 14 the -2.8ppm is the tell.
The KH* signature is not in any text book. There are many new compounds generated that were also tested such KH*CL (see Table 1).    You can download the paper here – to reference and then please purchase your own copy. 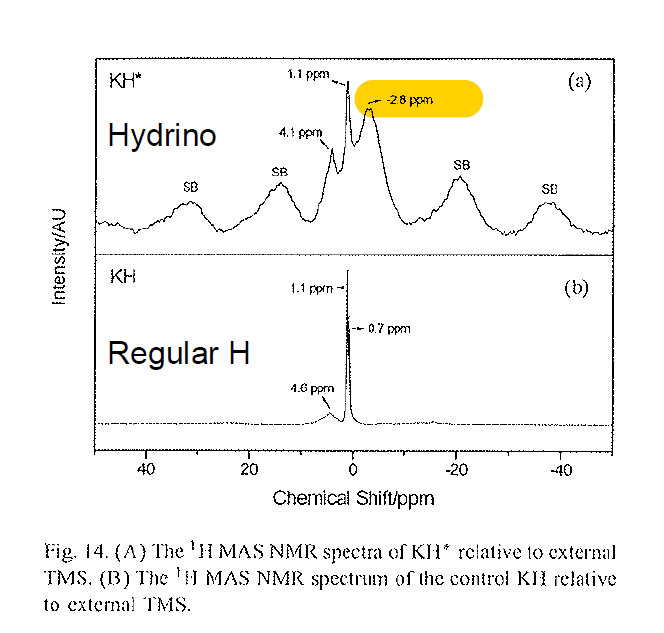 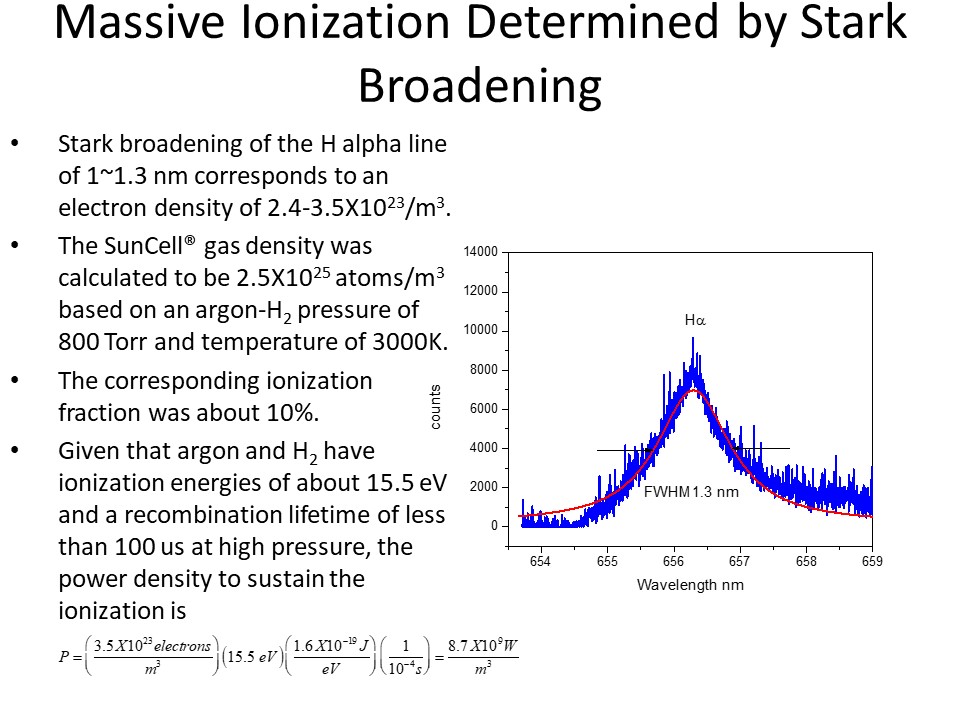 A widely understood measure is line broadening. This broadening shows a 8.7 million kW per square metre at peak. (from a different paper).

You will now agree hydrino hydrogen exists.   What about power?   The reports of the validators are on BLP’s website.  We have short summaries – contact us.  As a start watch this video by the validators from October 2016.  In 2mins you will see megawatt (MW) power from reactants that can only generate 20 watts by conventional chemistry.  Meaning unless the hydrino reaction exists, no other known chemical reaction can generate more than 20watts. The credentials of the validators are at the beginning. 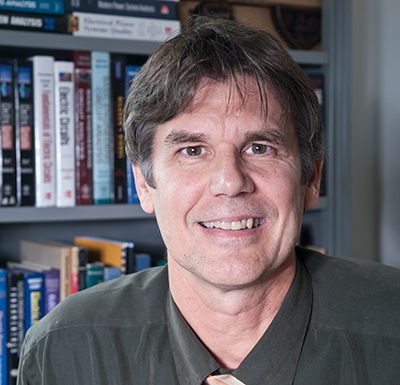 “One of my jobs at the utility was to go out and look at everyone who came up with the next perpetual motion machine and show them their measurement errors and how they weren’t using real science.  Once I met Randy and Bill and saw their outstanding science it became impossible to debunk,..and led to an investment by Atlantic Energy.” (2:20)

This immense power result is now published in the August 2018 Chinese Journal of Physics. (see link).   For a free copy click here.  We have an entire (private) website dedicated to scientific details. However, here are the earth-shattering highlights.

The calorimetrically measured power of a typical 80 mg, 10 microliter shot shot ignition released by the nascent HOH catalyzed transition of H to hydrino state H2(1/4) was 400,000 W. The catalysis reaction product H2(1/4) was identified by Raman spectroscopy, photoluminescence emission spectroscopy, X-ray photoelectron spectroscopy, and MAS 1H NMR. Water impregnated in a conductive silver matrix was found to detonate under application of a very low voltage, high current to produce a shockwave that is about equivalent to an order of magnitude more than gunpowder.

Dr. Randell Mills has solved the electron.  It is a superconducting sphere of charge that is fully described by Maxwell’s equations. Although a point electron is inherently unstable, a continuous ring of charge *is* stable. They all knew this,  Dirac in 1925 modelled electrons were rings in circular orbits. Schrodinger tried the electron as a toroidal 3D structure.  But nobody took the sensible step: model two rings… Then three…all over the sphere etc.   The atomic electron is a super conducting sphere of charge.

When you do it this way you find the solution implies the electron has spin  – which the quantum mechanics point-wave model lacks completely.  But electrons spin in all experiments!  Points cannot spin.  Waves cannot spin.   You will wonder how the scientists of the world can be so wrong, and so resistant.  For that we need history – Thomas Kuhn from the “Structure of Scientific Revolutions” says:

Normal science is a strenuous and devoted attempt to force nature into the conceptual boxes supplied by professional education. Because that education is both rigorous and rigid, these answers come to exert a deep hold on the scientific mind…

Maxwell’s equations were as revolutionary as Einstein’s, and they were resisted accordingly. The invention of other new theories regularly, and appropriately, evokes the same response from some of the specialists on whose area of special competence they impinge. For these men the new theory implies a change in the rules governing the prior practice of normal science. Inevitably, therefore, it reflects upon much scientific work they have already successfully completed.

That is why a new theory, however special its range of application, is seldom or never just an increment to what is already known. Its assimilation requires the reconstruction of prior theory and the re-evaluation of prior fact, an intrinsically revolutionary process that is seldom completed by a single man and never overnight.

Much more to say about  that.

So the hydrino is a simple thing. But you can’t predict it is there till you know what an atom is, and for that you need the right model of the electron. The hydrino is a hydrogen atom with the electron at a closer position to the nucleus. 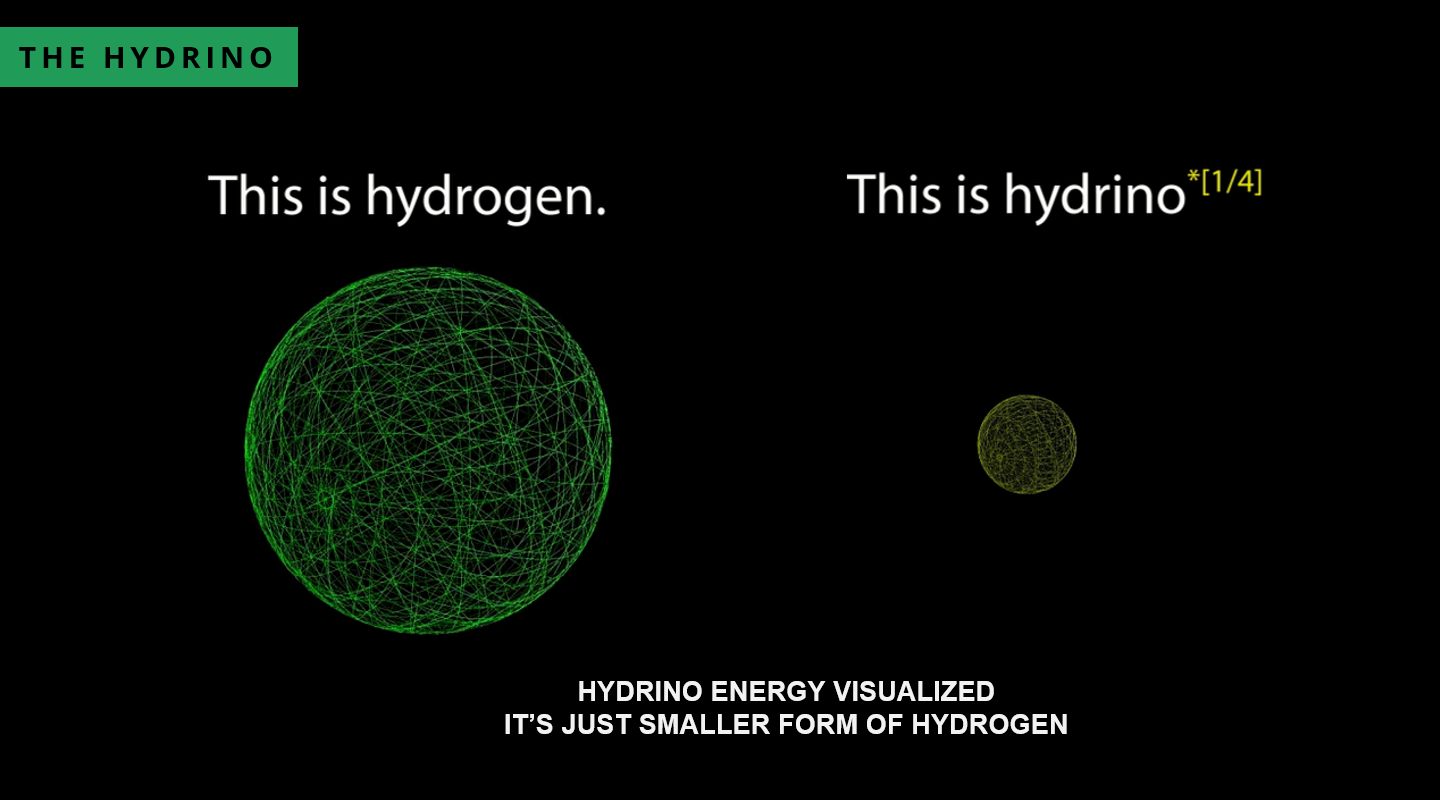 Overview: Mills figured out that the electron is a charged membrane.  It isn’t a point hiding out in weird orbital shapes (we still teach to students in quantum mechanics).  The orbitals are spherical (in atoms) because the charge wants to be equally close to the proton.  Key insight: quantum mechanics uses spherical harmonics to model probability spaces, where point electrons can be.  In reality, electrons are not points but charged membranes  – we use spherical harmonics math to describe how they come together on a sphere. Electrons are real.  Molecular orbitals can take different shapes due to binding.

Mills has an exact solution – like an engineer knows a bridge – to molecules. His closed form equations match molecular properties of NIST data perfectly.    Quantum Mechanics never got beyond the hydrogen atom (if you don’t know that you are in for a rude awakening- they use actual data to approximate results for anything in nature) 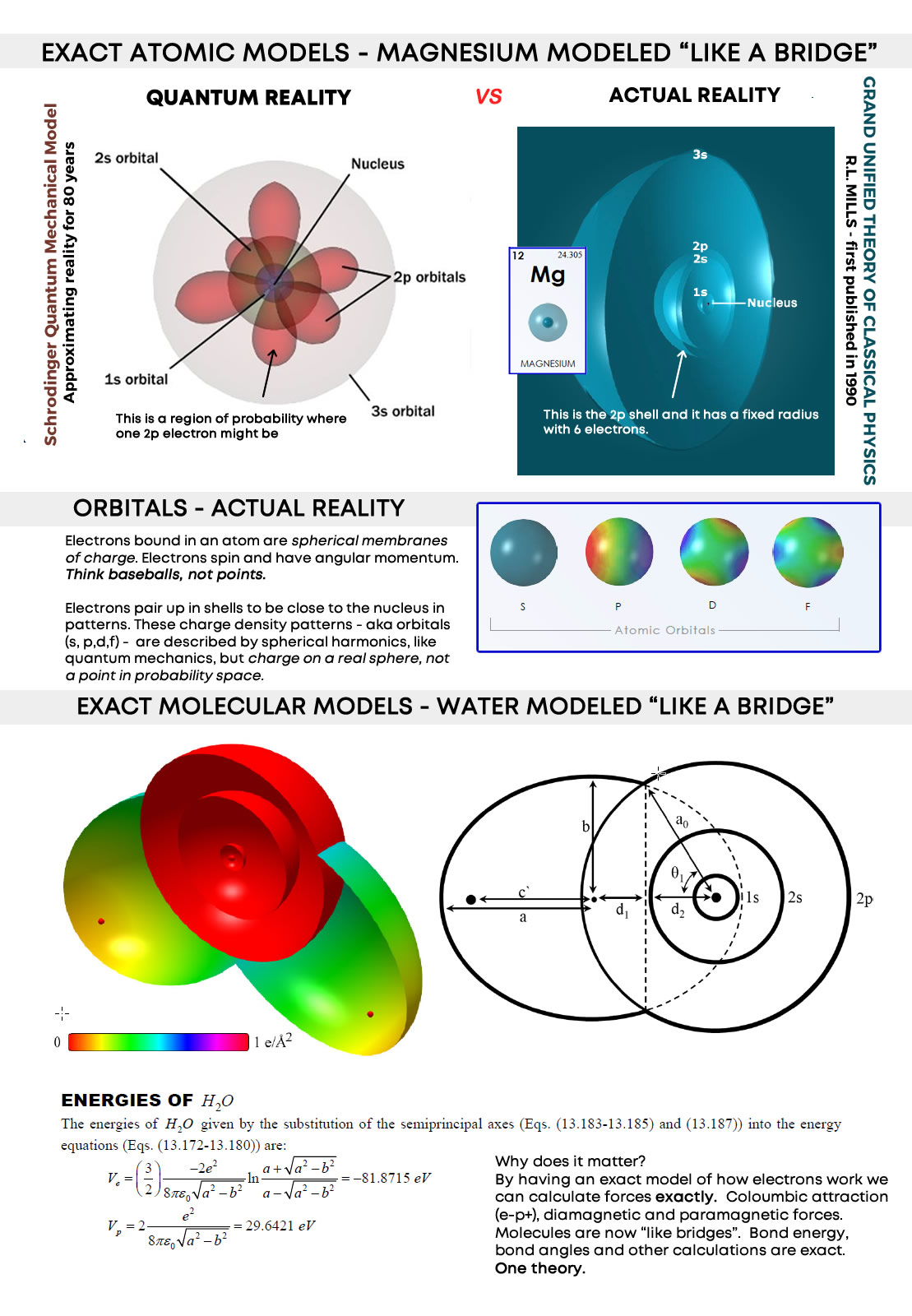