At our Private Investment Firm we are investing in energy technologies that are world-changing.  A new Energy? We get that right now you are somewhere between disbelief and skepticism.  While you are in disbelief, many companies are working around the clock to bring this to market – a new industry is forming.

We face the same uphill battle as any technology that is revolutionary. We are part of the final wave of investment before it hits the market, like Apple Computers in 2007 just before iPhone 1.0 was released.  Nobody believed iPhone was real.  Steve Balmer of Microsoft said “There’s no chance the iPhone is going to significant market share. No chance.”  The iPhone made Apple a Trillion dollar company.   So-called experts often get it wrong about new innovations.

Watch our 21 minute video that condenses 30 years of work by Brilliant Light Power.  In our data room we have two longer documentaries that bring this new energy to life even more.  We are getting deal flow from other hydrino energy competitors and will invest in any company that has a clear path to market and defensible patents.  We believe the market leader is Brilliant Light Power.  Here is their story:

Our team was recently at a Family Office conference in the “Oil Capital of the World.”  Houston has a strong entrepreneurial spirit in both energy to aerospace. Kendrick and I sat down to answer some common questions we were asked from families.

Our story really began in 2006.  Brett Holverstott, our science advisor, went to work for physicist Randell Mills in his New Jersey Brilliant Light Power lab.  This experience changed Brett’s life because he was the first student in history to learn Mills theoretical work while learning Quantum theory at university.

Listen to an audio clip (4min) of Brett’s story below.  (note: play button is small don’t miss it)

by Brett Holverstott, End Of Petroleum

From 2012-2016, Brett wrote a book to introduce the story to a wide scientific audience.  He integrates 80 years of quantum mechanics and 30 years of Mills’ theoretical work in classical physics. Brett successfully integrates two complex and deep subjects to map from the old (quantum mechanics) to the new (Mills’ classical physics). You can see from the Amazon reviews that people trust us.

A word of warning.  We know that off-the cuff responses to this tech go something like this:

There are always naysayers to revolutionary ideas. The physicists said this about the Wright brothers:

I can state flatly that heavier than air flying machines are impossible.— Lord Kelvin, 1895

Just like the invention of the airplane, the internet, and smartphones, here the future belongs to the truth.

There is always negativity to revolutionary ideas- let’s handle this head on.

A major change to the world of physics is coming. Usually when a new idea is put forward, people disagree but eventually a course correction takes place. Here the course correction process in science isn’t working – many physicists are stuck in an old way of thinking.  But Mills theory works far better at the atomic scale, and matches all experimental data on atoms and molecules we have.

This is not a one man show.  There are hundreds of scientists behind Mills theory (GUTCP), but on the other hand there are 7.53 billion people on the earth so change takes time.  Dr. Jonathan Phillips – a eminent physicist who has known Mills since 1990 – says “this [big change to physics] is something we haven’t had to deal with in 75 years.”  What’s keeping the progress from happening in physics and Mills from being recognized?  Mills isn’t in the Ivory Tower of a university – leading to immense distrust by academics. Complicating the matter is that quantum mechanics is almost a belief system for physicists (if you don’t understand that we’ll show you in our videos) – so physicists get highly skeptical that anyone could have a better theory – let alone someone trying to profit from their ideas as an inventor.

All negativity about this tech or Mills characters are simple lies – some sadly come from some significant scientists who made off-the-cuff remarks 20 years ago with no understanding.

note: hit the full screen button on these slides for ease of use and then ESC to go back to the regular web page – there are forward buttons)

Quantum Physicists in 2019 admit they are wrong

Eventually though if we have a better theory that matches (all) evidence it must be accepted.

On April 17, 2019 some world leading physicists held a public forum at a world leading physics establishment – the Perimeter Institute – to announce something unthinkable. Quantum Mechanics is wrong.  To give an analogy this is scientific equivalent of the fall of the Roman Empire. Bohr, Schrodinger, and Heisenberg are considered the founders of modern physics.  In this video Lee Smolin compares the founders of Quantum Mechanics to Ptolemy (geocentric earth model – sun goes around the earth).  Does the Perimeter Institute know about Mills theory?  We told them one year ago (see here).  That doesn’t mean they fully subscribe to Mills theory – but hundreds of scientists do.

Remember, these Quantum institutes get millions in grants for quantum research – so the switchover to Mills theory will take time (years).  Imagine going to your donors and saying all the work they’ve been funding is actually wrong and they need to start over.

For now the Perimeter Institute is saying they are “open to new ideas.”  To put it simply:  if hydrinos are real, quantum mechanics is wrong.  Major chemical companies like WR Grace have done tests to show hydrinos are real.

It isn’t just physics that is being disrupted by Mills, but energy.  Hydrino energy is the Next Energy, a leap-forward technology.

Energy VCs – you’d think would be ontop of this – but they can’t handle new science.  VCs are usually ex-engineers and they work on the deals that come their way. They don’t do basic science. When they don’t understand the science, they reach out to their ex-university professors.  The professors are in the the same boat “haven’t heard of this before, but quantum mechanics is unlikely to be wrong.”  As far as we know, Brilliant Light Power hasn’t tried to raise money from Energy VCs.

You’d might think that everyone would drop what they are doing, and thousands of people would study Mills work — they don’t.

Why Haven’t You Heard About This Before?

There have been media stories on this tech – some of them below. However, on the scale of the civilization-level impact of this technology – hydrino energy is virtually unreported (despite 100+ scientific articles and a publicly available theoretical treatise). Brilliant Light Power in 2019 probably won’t be able to handle world-wide media attention that is coming.  And they don’t seek it out – potential OEM partners like GE naturally don’t want media coverage because they have an existing business in power.

Our team is available for interviews.   We are working with Kert Davies, ex-Greenpeace who has reached out to Steve Mufson of the Washington Post. Kert is suggesting that End Of Petroleum serve as the expert advisor to help bolster and explain the science. In short, more media attention is coming.

CNN Featured Brilliant Light Power.   In this piece it shows the electrical generation version of the SunCell.  In the 2016-2017 prototype, the concentrated photovoltaic (CPV) modules used for electricity generation did not meet their 20 year service life.  They were not designed to be around a 3000 degree plasma furnace. The SunCell can’t come back for repair 2-3 years after deployment. The manufacturers of the CPV Boeing Spectrolab and Azure Space have redesigned the modules and they are in testing (2019).  The SunCell prototype is working for long periods.

Blacklight Power – the former name of Brilliant Light Power – was featured on CNN Money in 2008.   In 2008, BLP was getting low power densities and were not commercially competitive.   On January 28 2014 in front of their investors they were able to make hydrino reactions explosive and that was a pivotal moment in history.  (easter egg: that moment has been recorded and is here to see).  Turn off your “skeptic” hat and realize you’re alive to watch someone perhaps more important than Isaac Newton, James Maxwell, or Albert Einstein to science. Enjoy it.  We can go as deep as you want into the science, far far deeper than any other team. Brett Holverstott sat in the  Princeton Archives for a long time, trying to understand the history of Quantum Mechanics and probably knows more than anyone alive on how we got here. 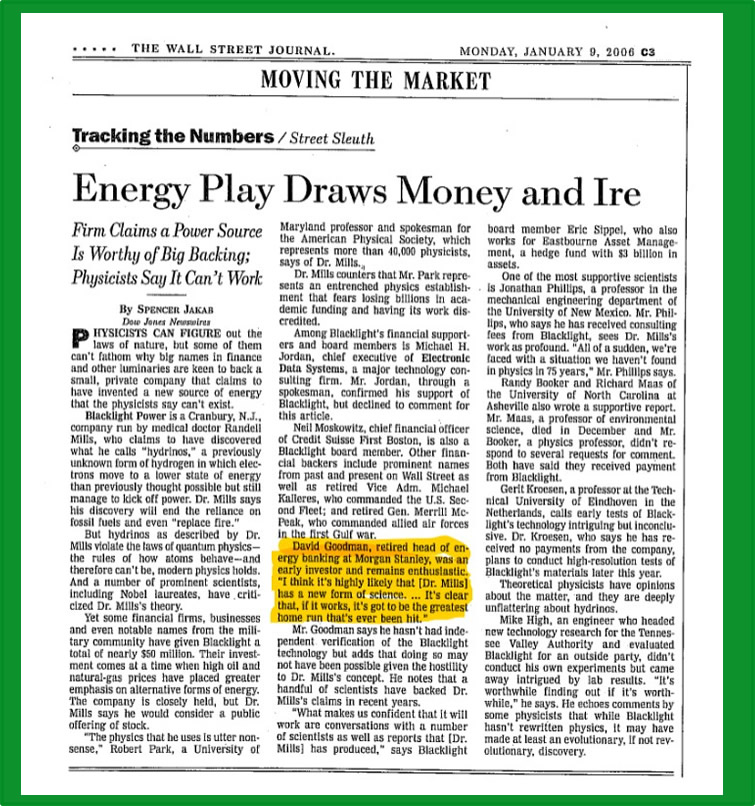 This article shows that heavyweight investors like the Chairman of Morgan Stanley, Dick Fisher, backed Randell Mills.  Fisher said, “We have stayed supportive of this in the face of fairly significant scientists saying it can’t be.”  In this article you can see what Morgan Stanley’s Head of Energy Banking said.  In our view, the ball is now in the air and we’re handing you a glove.  In our People Dataroom we interview many early investors and you can listen in. 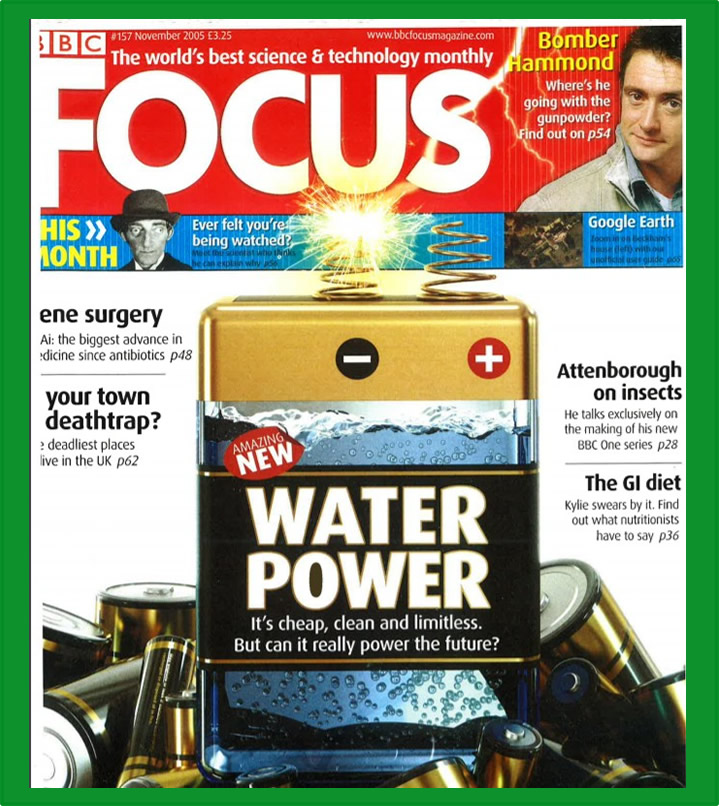 A Good article from BBC Focus. Dr. Jonathan Phillips (Los Alamos Staff Scientist, University of New Mexico, and now Naval Postgraduate School) makes some great comments.  The detractor Rathke, made serious errors in his criticism which were dispatched immediately by Dr. Mills.  There is no scientist, ever, who has written a peer reviewed paper against a single line of Mills work.  On the other hand, a massive stream of 100+ experimental peer-reviewed articles support hydrino energy (easter egg: we even have Major Chemical companies like WR Grace saying hydrinos were shown to exist in their independent tests. Go here for that audio interview) 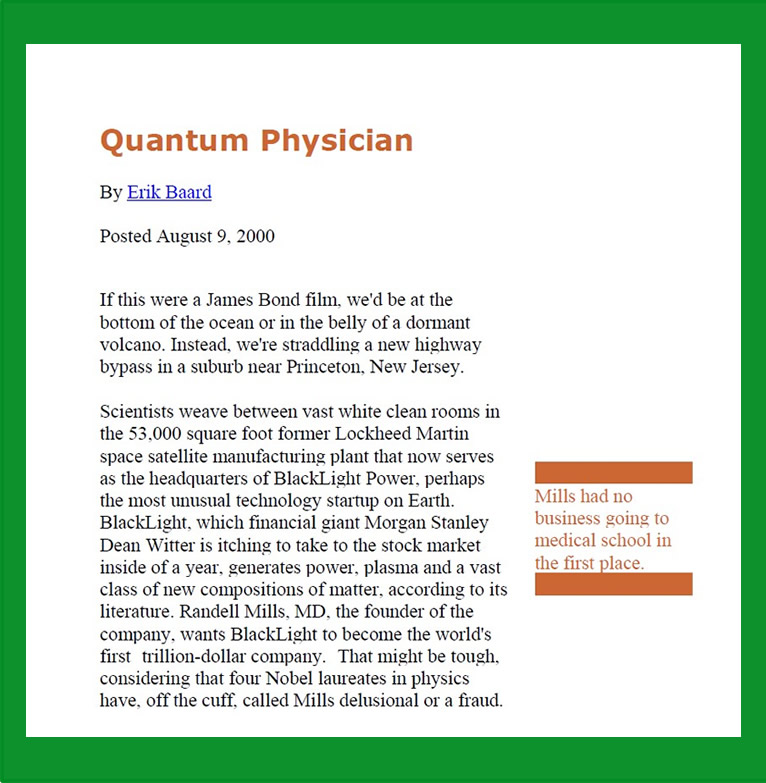 This article covers off the personality of Dr. Randell Mills.  You’ll see that unlike many mathematical physicists he is grounded in reality, like an engineer.   Surely, he will go down as one of the greatest, if not the greatest, scientist in human history.  (easter egg:  to really understand the person that is Dr. Mills, listen to Brett and I talk here) 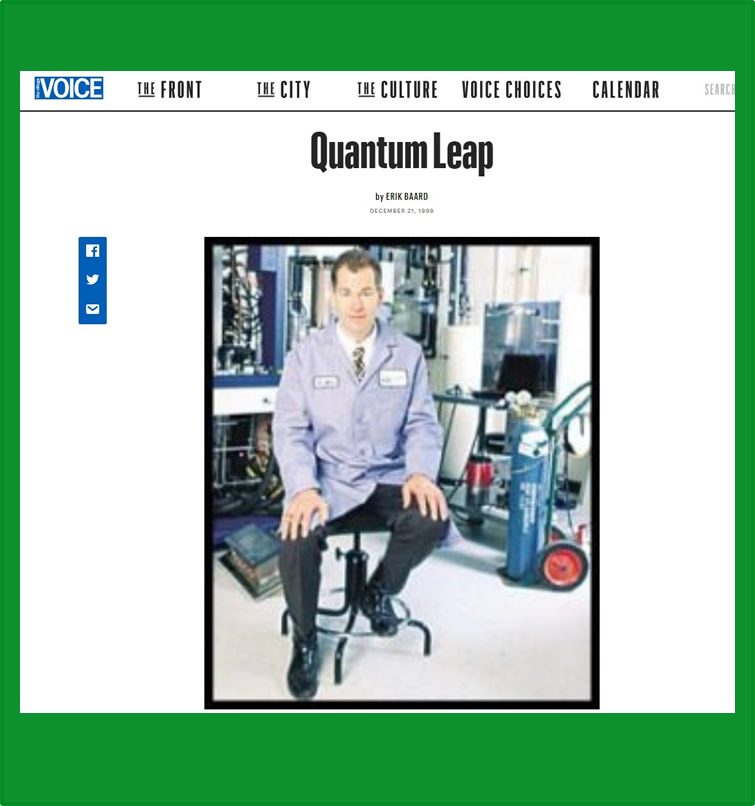 A good article on some of the controversy initiated by a dire skeptic named Robert Park who obstructed Mills patents.  Park’s – despite being a physicist – had no idea what he was talking about.  Which goes to show you there are “bad guys” in every profession, at every level.  It is bad to use your authority to stop inquiry and sabotage progress to maintain your position.  But the article also covers some “good guys”.  Some of them mentioned are Dr. Shelby Brewer – a top nuclear official in the Department of Energy – and Dr. Johannes Conrads who has reproduced high energy hydrinos.  Even NASA is mentioned which
says they are encouraged. (easter egg: NASA funded a study on hydrinos here is the report – keep in mind this is 17 years ago and hydrinos are now in 2019 at a power density rocket fuel cannot compete with!)

We look forward to talking to you more.  Email us to receive our deck which gives you access to feature movies. Without the background knowledge you can’t get the confidence that this is something substantial, and develop the trust in our team.

We recommended our book which is broad based in physics. The book America’s Newton is an ever better first read for the business side – it is intensely well researched and covers the early story of Mills – how he came onto the scene when cold fusion was a scandal.  (In fact, Pons and Fleischmann “cold fusion” is really chemical hydrino catalysis, but few took Mills seriously despite admitting he is brilliant)  America’s Newton shows how elite electrical engineers like the founder of a supercomputer company that merged with Cray, and separately the ex-Chairman of AMD, backed and invested in Mills’ company. 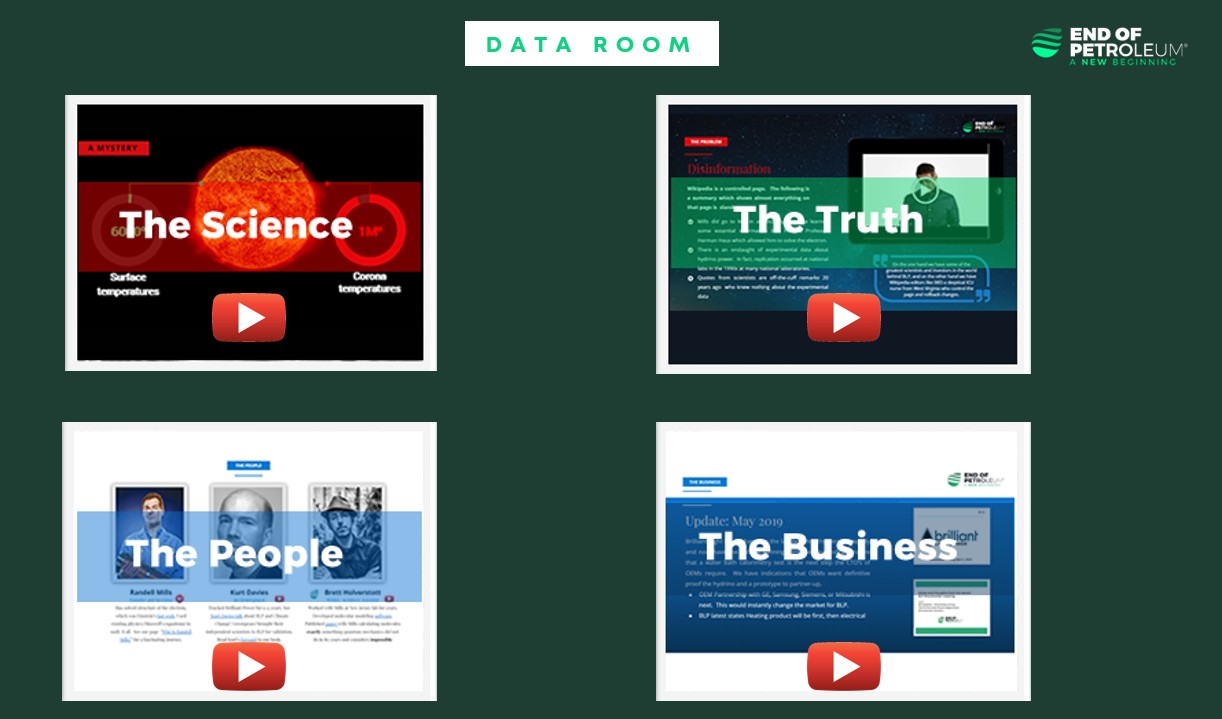